There is a common question that I always hear. People ask, "Why God allow us to go through trials and tribulation?" I am not God but I have found that God is with me.

If you are an believer in Jesus, you will have trials and tribulations. There are some people that teach that an Christian, you will have the perfect life. This is bad teaching.

Why does God allows an child to have cancer or a person getting bullied at work? Why does God allow a person to have money issues even if that person is a faithful giver to the Lord?
I will try to answer these questions.

I am like you. I face trials and tribulations, they are not easy. I do the right steps and feel so bad.
Here are some Bible verses that has helped me greatly doing these time, may these words help you.

We as believers needs to claim Romans 8:28. The verse says, "And we know that all things work together for good to those who love God, to those who are the called according to His purpose."
I don't believe that pours His wrath on us but we live in an fallen world. You will have problems in this world.

I have lost my peace when issues of life occurred. It could be at work or dealing with people. I feel that I am forsaken and can't move forward. Jesus doesn't want me in that state. John 16:33 says, "I have told you these things, so that in me you will have peace. In this world you will have trouble. But take heart! I have overcome the world!"

I say that I believe in God but my actions do not show it. The trials will make me a better person in Christ. 1 Peter 1:6-7 says, "In all this you greatly rejoice, though now for a little while you may have had to suffer grief in all kinds of trials. These have come so that the proven genuineness of your faith-of greater worth than gold, which perishes even though refined by fire- may result in praise, glory and honor when Christ is revealed."

We should not suffer because we have committed an crime. 1 Peter 4:15 says, "If you suffer, it should not be as a murder, or thief or any other kind of criminal, or even a meddler." So let us not suffer because of these actions on the previous sentence. God can use even our bad actions to mold us.

I have an homework project for you. You will be or are going through an trial. This week read James 1 this week. God will use the trials and tribulations for His glory. 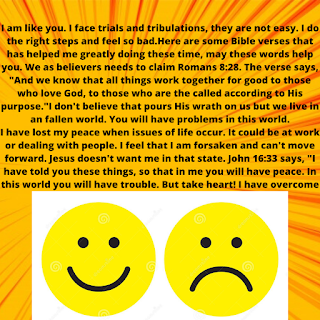 Email ThisBlogThis!Share to TwitterShare to FacebookShare to Pinterest
Labels: trials

I will be the first to admit that I struggled with God. I love God greatly but I do not understand His ways. There are many people that want to make me legalistic but they forgot about God's grace.

I can relate to Jacob. He had his own will and didn't always do what God wanted for him.
Life has an way to humble an person. A friend that the family lived died. I just went to an funeral of someone that was murdered. Life doesn't always make sense to me.

If you are wondering where Paddan Aram is at, it is in the area of Northwest Mesopotamia. This area was most likely the Eastern part of modern-day Syria and Iraq.  God appears to us in different times of our lives. God appeared to me in special ways.

I had trials that seem that it will never end then it does. God did great spiritual surgery upon my heart.
God did the same to Jacob. Jacob means 'he grasps the heels.' It is an idiom for people that are not honest.

I always find it interesting to think that people can live by following the Old Testament law after following Jesus. Jesus came to fulfill the Old Testament law so when He died on the cross and arose from the dead. That the curse of the law would be no more. We are like Jacob. We can't live the law and be right before God, that includes Christians. Galatians 3:10 says, "For who rely on the works of the law are under a curse, as it is written: 'Cursed is everyone who does not continue to do everything written in the book of the law." If you want to further study, you can study Deuteronomy 27:26.
I am sad to say that there a few movement that suppose to Christians that follow the Old Testament like Old Testament Jews should read Deuteronomy 27:26.

Even the best Christian will sin everyday. James 2:10 says, "For whoever keeps the whole law and yet stumbles are one point is guilty of breaking it all." There are over 600 Old Testament laws. If you are an Sabbath Christians that believe in following the 600 laws, you can't follow over 600 of them.
You break these laws everyday.

If you a non-believer, you can't be made right by following the law. We need Jesus to be made right.
That is why Jesus died on the cross and arose from the dead. May we all from the legalist Christian to the non-believer realize Matthew 5:17-20. Only Jesus is sinless.

Genesis 35:10 says, "But you will no longer be called Jacob but your name be called Israel.' So he named him Israel." Many Christians say the Jews are more spiritual than they are because they keep the law. Israel means 'he struggles with God.'

We all struggle with God, this includes myself but we need more grace and not more legalism.
May we learn this.
May we embrace Hebrews 4:16. 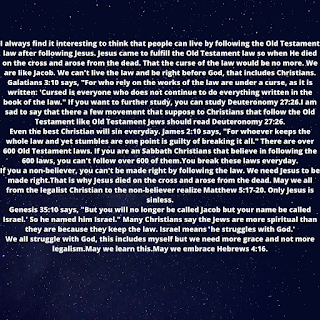 D Tay
I love God and want God to be honored