Do we need an moment of silence?

We always have lived in an world of craziness. Social Media does not make mankind worst but show what is in every person's desires. Who is to blame?

Let's take an moment of silence. We hear that the president is the reason for the world's issues.
There are Podcasts that are self-righteous and the podcasters act holier than thy.
Does the podcasters have blame why the world is messed up?

We need to look at the beginning. God made everything perfect. There was perfection with the first two people that God created. Genesis 1:31 says, "God saw all that He had made and behold, it was very good."  Psalm 18:30 says, "As for God, his way is perfect: The Lord’s word is flawless; he shields all who take refuge in him." We can't blame God for the messed that the world is in.

Can we blame the first two people for the worrisome world that we live in?
Yes, we can blame the issues of today to Adam.

Now the serpent was more crafty than any of the wild animals the Lord God had made. He said to the woman, “Did God really say, ‘You must not eat from any tree in the garden’?”The woman said to the serpent, “We may eat fruit from the trees in the garden,but God did say, ‘You must not eat fruit from the tree that is in the middle of the garden, and you must not touch it, or you will die.’” “You will not certainly die,” the serpent said to the woman.  “For God knows that when you eat from it your eyes will be opened, and you will be like God, knowing good and evil.” When the woman saw that the fruit of the tree was good for food and pleasing to the eye, and also desirable for gaining wisdom, she took some and ate it. She also gave some to her husband, who was with her, and he ate it. Then the eyes of both of them were opened, and they realized they were naked; so they sewed fig leaves together and made coverings for themselves. Then the man and his wife heard the sound of the Lord God as he was walking in the garden in the cool of the day, and they hid from the Lord God among the trees of the garden. But the Lord God called to the man, “Where are you?” He answered, “I heard you in the garden, and I was afraid because I was naked; so I hid.”And he said, “Who told you that you were naked? Have you eaten from the tree that I commanded you not to eat from?” The man said, “The woman you put here with me—she gave me some fruit from the tree, and I ate it.” Then the Lord God said to the woman, “What is this you have done?” The woman said, “The serpent deceived me, and I ate.”So the Lord God said to the serpent, “Because you have done this, “Cursed are you above all livestock and all wild animals! You will crawl on your belly and you will eat dust all the days of your life.And I will put enmity between you and the woman, and between your offspring and hers; he will crush your head, and you will strike his heel.” To the woman he said, “I will make your pains in childbearing very severe; with painful labor you will give birth to children.  Your desire will be for your husband, and he will rule over you.”
To Adam he said, “Because you listened to your wife and ate fruit from the tree about which I commanded you, ‘You must not eat from it,’ “Cursed is the ground because of you; through painful toil you will eat food from it all the days of your life. It will produce thorns and thistles for you, and you will eat the plants of the field. By the sweat of your brow you will eat your food until you return to the ground, since from it you were taken; for dust you are and to dust you will return.” Adam named his wife Eve, because she would become the mother of all the living. The Lord God made garments of skin for Adam and his wife and clothed them.And the Lord God said, “The man has now become like one of us, knowing good and evil. He must not be allowed to reach out his hand and take also from the tree of life and eat, and live forever.” So the Lord God banished him from the Garden of Eden to work the ground from which he had been taken. After he drove the man out, he placed on the east side of the Garden of Eden cherubim and a flaming sword flashing back and forth to guard the way to the tree of life."

"Therefore, just as sin entered the world through one man, and death through sin,and in this way death came to all people, because all sinned— To be sure, sin was in the world before the law was given, but sin is not charged against anyone’s account where there is no law. Nevertheless, death reigned from the time of Adam to the time of Moses, even over those who did not sin by breaking a command, as did Adam, who is a pattern of the one to come. But the gift is not like the trespass. For if the many died by the trespass of the one man, how much more did God’s grace and the gift that came by the grace of the one man, Jesus Christ, overflow to the many! Nor can the gift of God be compared with the result of one man’s sin: The judgment followed one sin and brought condemnation, but the gift followed many trespasses and brought justification. For if, by the trespass of the one man, death reigned through that one man, how much more will those who receive God’s abundant provision of grace and of the gift of righteousness reign in life through the one man, Jesus Christ! Consequently, just as one trespass resulted in condemnation for all people, so also one righteous act resulted in justification and life for all people. For just as through the disobedience of the one man the many were made sinners, so also through the obedience of the one man the many will be made righteous.  The law was brought in so that the trespass might increase. But where sin increased, grace increased all the more, so that, just as sin reigned in death, so also grace might reign through righteousness to bring eternal life through Jesus Christ our Lord."

The issues of the world comes down to these words.

For God so loved the world that he gave his one and only Son, that whoever believes in him shall not perish but have eternal life. For God did not send his Son into the world to condemn the world, but to save the world through him.Whoever believes in him is not condemned, but whoever does not believe stands condemned already because they have not believed in the name of God’s one and only Son. This is the verdict: Light has come into the world, but people loved darkness instead of light because their deeds were evil. Everyone who does evil hates the light, and will not come into the light for fear that their deeds will be exposed. 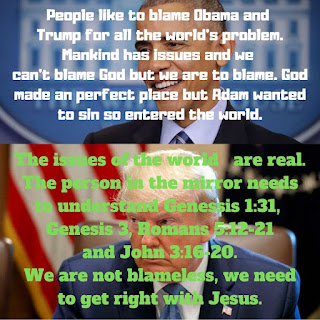 Email ThisBlogThis!Share to TwitterShare to FacebookShare to Pinterest
Labels: We always have lived in an world of craziness
Newer Posts Older Posts Home
Subscribe to: Posts (Atom)

D Tay
I love God and want God to be honored